Firstly, let me congratulate Helen Dalton as becoming new NSW Member for Murray. This election victory is a mandate from our community that the majority of people have had enough of The FAILED Murray Darling Basin Plan and screwed NSW Water Sharing Plan.

After 35 years of National Party rule - Murray is now a Shooters Fishers and Farmers seat along with Barwon and Orange which makes up 72% of NSW land mass.

A few years ago in a meeting with now Vice President Paul Pierotti, Federal Member for Farrer Sussan Ley and myself, at her Griffith office, Sussan thumped the desk and said “The Lower Lakes and Coorong were off the table and never to bring them up in meetings again.”

We demanded to know why when this once estuarine region was wasting so much of our productive water and she explained it is about South Australian Liberal Politics and point blank refused to discuss the matter further.

We have also in many meetings raised the issue of our regions declining economy and showed her Gross Regional Product figures etc. which she also ignored.

Sussan Ley MP
Really productive morning with Major General Day in the Murrumbidgee Irrigation Area. Talking to farmers and community members about farm management, risk and decision making in this challenging environment.
A few more now lining up to say they do
NOT support Pausing the Plan, including
Griffith and Leeton LGAs
Ricegrowers
Coleambally Irrigation
Farmers in the MIA 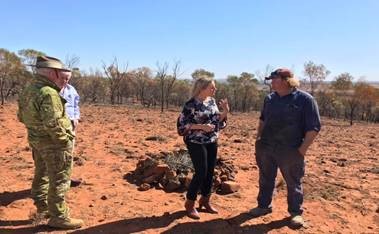 I followed this up by speaking to Deputy Mayor Doug Curran who said that Councillors were aware that the General Manager Brett Stonestreet was attending this meeting BUT AT NO TIME has Councillors resolved to Not Support Pausing The PLAN.

Neither Brett Stonestreet or Sussan Ley are listening to our Communities and are both out of line.

At the last MLHD Hospital Breakfast meeting I asked the Manager of Construction for The Griffith Base Hospital about this 10 Year refurb, how long it would take to build a completely new Hospital ? – greenfield where the current lawn area and demolished Nurses Quarters were and he said 2 Years.
Brad Hazzard said to now deceased Honourable Stewart McWilliam at Griffith Ex-Servicemans Club presentation that we would a NEW hospital in 3 years – THAT IS NOW 2 YEARS AGO !

This entire hospital development needs to be reviewed so as to expedite this URGENT project with services like 24/7 emergency Orthopaedics etc. immediately implemented.

Griffith Business Chamber invite all members and guests to a Meet the Candidate session in the lead up to the Federal Election.

This is an opportunity to hear from candidates on what matters about our Farrer electorate and gives you a better understanding of their views so come election time, you have the right information on who to vote for.

The forum will be moderated by Griffith Business Chamber and run for approximately 2 hours. Questions will focus on our 10 Point Plan plus there’ll also be questions permitted from the audience.
When: Thursday 9th May 2019
Time: 6pm – 8pm
Where: The Griffith Leagues Club
Cost: FREE to attend and open to members of the public. RSVP’s to Secretary Amanda Quarisa at info@griffithbusinesschamber.com.au by Tuesday 7th May 2019

Griffith Business Chamber's  Happy Hour of Networking
Held on the first Thursday of each month at Griffith Leagues Club Beer Garden from 5.30pm-6.30pm.
Connect with the business community, make new contacts and promote your business! The best part is it's free to attend and receive a free drink!
Don't forget to bring your business cards and your employee's!

Chamber Side Walk Sale- Easter Saturday
This year is gearing up to be a fantastic event. We have 15 businesses participating, so be sure to support our local retailers who will have fantastic bargains from 9am! The Childrens Easter Brunch is on again at the CWA Park. Come along with your family and friends for a fabulous morning of food, fun and games. The morning will include brunch, craft, singing & dancing, face painting and a stage show. Plus fabulous games including a monster Easter egg hunt at 11.15am, giant tug-of-war and parachute games.
There’s loads of events and activities happening this Easter Weekend! Enjoy!