Thanks to all businesses who have already renewed membership and a friendly reminder for those who have not paid yet that annual membership is now overdue. Your membership entitlements with NSWBusiness Chamber will cease on 1st August if not paid by 31st July 2018. Please contact our Treasurer Sky Han on SHan@royspagnolo.com.au if you have any queries regarding renewal invoices.

Our Quarterly Report for April - June is now available to view online. It's a snapshot of activity Chamber have understaken in the last 3 months to provide transparency and so members know our Executive work extremely hard on issues that face our business community.

Many concerned ratepayers have asked me why they did not know when Council’s Housing Forum was on and I have advised them that for some unknown reason the so called community consultation on housing was invite only to selected people. Council have provided the power point presentation that was addressed on the night - View here.

Unfortunately the information on this does nothing to address the immediate and very serious Housing and Rental crisis that has been negatively affecting our entire community for some time. Most of the earmarked land for development is many years away.
Council can make a huge contribution to resolving “The Housing Crisis” by immediately developing themselves ratepayer owned DA approved and ready 1A Lake Wyangan 180 blocks.

This Council needs to show leadership and ownership of this problem and develop this land to be real estate sales ready themselves, as originally planned when they purchased it around 20 years ago. This should happen by Christmas 2018.

Council needs to pull out all stops to incentivise developments and get housing going immediately;

We were pleased to see that Chamber’s submission to NSW Government water Inquiry has been adopted as a key recommendation;

Long-term infrastructure options considered for further investigation to improve security and reliability of supply in the valley include: Burrinjuck Dam raising from 1000 GL  (up to 1,700 GL potentially) Preliminary Capital Cost $873 Million

The NSW Government is awash with funds from The Poles and Wires sell off and rather than spending on knocking down good stadiums and moving museums It is time a REAL Game changer Project for our future was invested in.

A VERY serious question is; What is the estimated life span of Burrinjuck Dam Wall?

"Burrinjuck Dam is 106 years old and one of the oldest masonry block dams in the world The majority of the concrete mix in the lower parts of wall is 5 parts crushed rock 3 parts sand 1 part cementIn the upper reaches of wall a weaker 6.75 parts rock 3 parts sand 1 part cement mix was used A stronger mix was used on the face of the wall"  More info here

THE LAND: June 21 ‘Raise level of Burrinjuck, dam fine idea’ BY JOHN ELLICOTT
ALTHOUGH Water NSW has dismissed any plans to build or enlarge any dams in NSW, the Riverina has not given up hope that Burrinjuck Dam’s capacity could be lifted one day. Although the cost of a new dam wall is over $3.5 billion, councils along the Murrumbidgee and in the Riverina believe the project is worthy of serious consideration by all levels of government. At the NSW Ministerial level, such a concept has not been put aside despite departmental advice about future water capacities and savings not including new catchments. With the NSW Government brimming with money from the Federal buy-out of its share in Snowy Hydro, the NSW Government has indicated it wants to invest in southern NSW with a once-in-generation project. Raising Burrinjuck’s capacity could be one of those landmark projects. Griffith is one of many Murrumbidgee area towns, including Wagga Wagga, that has put forward a proposal for increasing Burrinjuck’s capacity. The proponents have put forward the following figures to support their case: “Burrinjuck dam wall (now 106 years’ old) is 93 metres high and 361m above sea level at its crest,” the proponents say. “Burrinjuck dam currently has a surface area of 5500 hectares when full and dam capacity is 1028 gigalitres. “On a topographical map, if the 380m above sea level contour is adopted, the dam surface area would increase to an estimated 11,000 ha and have no impact on any towns. A new dam wall could raise the level by up to 20m and increase the potential storage volume to 3000 gigalitres. Several properties, portions of properties, recreational areas, eco resort and holiday houses would need to be resumed. The catchment area of Burrinjuck Dam is 12,953 sqkm, which is larger than the whole of the Snowy Mountains scheme (9070sqkm) “Burrinjuck catchment is 1,295,300ha (100mm per ha of runoff equates to 1 megalitre) and over Burrinjuck catchment area this totals 1295 gigalitres of water - more than the current dam can store. The average annual rainfall of the Burrinjuck catchment is 900mm with snow areas as high as 1700mm. The proponents say there a new dam wall could be built downstream from the existing wall or even built in situ incorporating the existing wall. The project would give greater water security and reduce floods 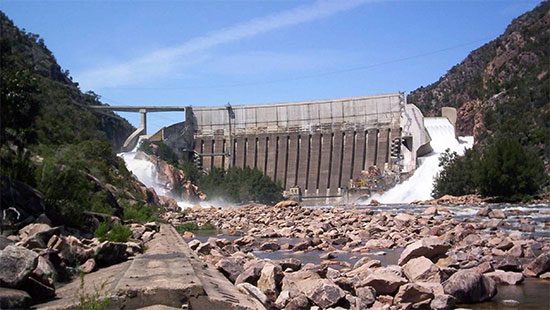 A radical proposal to quadruple the size of Burrinjuck Dam was floated at a NSW Upper House hearing on Wednesday.
The hearing, held in Griffith, is part of an investigation into the state’s handling of water resources and gave irrigators, businesses and public servants a chance to have their say on the matter.
Griffith Business Chamber president Paul Pierotti said raising the dam wall could protect the region from extreme climate events such as drought or last year’s floods and could be cost-neutral if it incorporated a hydro-electricity generator.
“We see this as a real triple-bottom line benefit for people, profit and planet,” Mr Pierotti said.
“No-one would ever need more water after this.”
The comments come just weeks after a massive heatwave saw the state’s power grid stretched to its limits because gas-fired power plants failed to come online.
“This create enough baseload from hydroelectricity that it would eradicate the need for coal-fired power plants,” Mr Pierotti said.
“We believe it would be cost-neutral to the taxpayer because significant money would come in from power generation.
“It would create very little disruption to the environment and allow better water management for the future; when it was developed 100 years ago it suited that time but we need to look forward and the entire underpinning of the Australian economy will be locally-grown food and fibre.”
Griffith mayor John Dal Broi called on water sharing rules and regulations to be made clearer, while others spruiked the benefits of the Clarence River Scheme, a controversial plan to divert flows from the Northern Rivers that fired up people near Grafton.
“I really want the average irrigator to be able to understand the whole water issue,” Councillor Dal Broi said. “The water trading rules, carry over rules, supplementary water rules are all so complex, you nearly have to be a professor to understand them all.”


THE LAND: 21 June 2018 "Stripping services hurts us, says Chamber" BY JOHN ELLICOTT
PAUL Pierotti is adamant Griffith deserves better, from education to health to technical and further education, and as head of the local business chamber often feels his pleas fall on deaf ears. He says there is even a line that leaves out Leeton and Griffith where public servants get government concessions to relocate that almost all towns south can offer. He feels over the years many services have been stripped. “Griffith is a regional capital to the Western Riverina and our region has the ability to reach a new age of economic boom but we are missing pieces of vital infrastructure that need to be rapidly addressed to unlock our region’s massive potential,” Mr Pierotti said. “Although we have recently built with a combination of community funds and St Vincent’s Private Hospital a new private facility, our Griffith Base Hospital is in a bad way, it has had 30 years of neglect and stripping of services.
There is exciting work happening in planning a new hospital that is said to cost $200m to $300m (it received $6m in NSW budget). “There was some more positive news recently with an impending Griffith Country University Centre soon to come. “Griffith TAFE is now the home of agriculture SkillsPoint
Headquarters for NSW and we look forward to taking training to agriculture and agribusiness to the next level. “This would be a welcome change as we have seen way too many haphazard toing and froing within TAFE. “Our two major high schools are currently being merged with some infrastructure upgrades in an attempt to address below state average performances but unless we have an effective way to encourage more quality, competent teachers many in the education system are not convinced.”