Side Walk Sale
Easter is not far away and Griffith Business Chamber will once again host a Side Walk Sale. If you wish to participate please register online HERE  by 10th April 2019. Please tell your neighbour to jump online too. Chamber has delivered posters to Main St businesses to display leading up to the Side Walk Sale and the day will feature a display red balloons and may even have the Easter Bunny handing out chocolates on the Saturday morning! We are seeking 4 people to assist with this event and are asking for any Banna Ave businesses to get in contact with our Secretary Amanda Quarisa. Events like these aren't possible without support of the main street business owners. 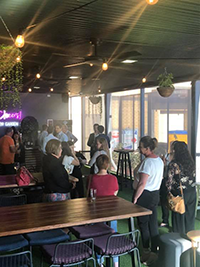 Thank you to those who attended our first Monthly Networking event. It was well received by all and we hope to grow this event every month.

There's no formal presentations, no selling, just a different way to inform you what's out there to help your business.  The purpose of these events is to connect the business community and an opportunity for you all to network, make new contacts and promote your business. We've had many members request this, so please support events like these.

Decentralisation News
Some recent great news with 60 staff from TAFE being decentralised to Griffith, this is the kind of economic injection that we have been screaming for which will go some way to recover from significant economic damage caused by The Murray Darling Basin Plan.
The other announcement which Griffith Business Chamber had initiated with relocating MDBA Head office has been disturbingly watered down to 30 people rather that the over 300 people that we had called for. Every little bit helps but this seems like election stunt.

State Election
The Mayor, Deputy Mayor and Cr Mercuri openly supporting and even handing out for The National Party before next weekends election is a worrying trend. In the past Council has tried to remain neutral and independent. Imagine if another candidate wins this election, how will Griffith City Council keep its high ground position representing our community when they would be at odds with the Community and that Member?

“As I have stated previously agenda items like Rose Garden reports are not appropriate for this Business and Major Projects committee.
In fact other than the retrospective reporting this agenda lacks substance and is disrespectful to the community volunteers who dedicate their time and expertise for Council’s benefit.
I will go further to allege that is typical of this Council’s inability to be transparent and treat community consultation seriously which I believe is not in the spirit of community involvement which is fundamental to the Local Government Act.
If this agenda and previous agendas of this committee is a serious attempt by Council then we have problems with the competency, vision, direction and performance of the Griffith City Council collective.
As an example the General Manager convinced Council to resource and allow the appointment of another Director $200k plus stating that we had turned the corner in economic downturn and that the local economy was on a rapid rise.
Clearly the local Gross Regional Product figures show we are at a decline and in fact have been since 2008 and our Mayors statements “the envy of State”,  “how many regional centres are growing as fast as Griffith?” as quoted by The Premier is misleading and untrue.
Council is not treating this committee with the respect we deserve, then in turn is not treating elected Councillors with respect and ultimately not treating our community with respect, which I consider to be an abuse of power, and a form of bullying by The Mayor,  General Manager and Director of Economic Development.” Paul Pierotti

Headline Gross Regional Product (GRP) is a measure of size or net wealth generated by the local economy.

Changes in this figure over time can represent changes in employment, productivity or the types of industries in the area.

Local Industry GRP shows the value of the local economy, generated by the local workers within the area regardless of where they live, after taxes and dividends leave the area. It is best thought of as GRP produced by local industries.
Local Residents GRP refers to the economic output of the residents of the area regardless of where they work. It is best thought of as the income received by people in the City. If the Residents GRP is high relative to the Local Industry GRP, this indicates that residents are contributing their economic productivity to other areas (most likely commuting out).
To understand the relative size of these measures and reasons behind the differences, GRP data should be viewed in conjunction with Jobs to workers ratio and Employment self-containmentdatasets. To understand the main contributors to GRP, this dataset should be viewed in conjunction with industry Value added. 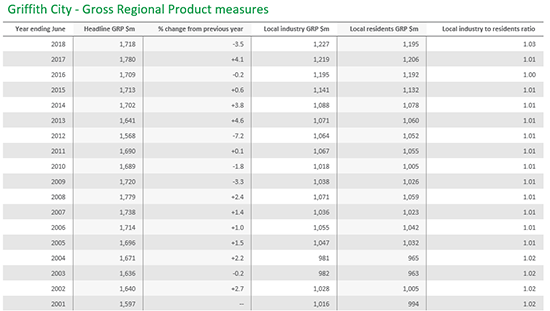 Source: National Institute of Economic and Industry Research (NIEIR) ©2018. Compiled and presented in economy.id by .id , the population experts.
Data are based on a 2016-17 price base for all years. NIEIR-ID data are inflation adjusted each year to allow direct comparison, and annual data releases adjust previous years’ figures to a new base year.Learn more